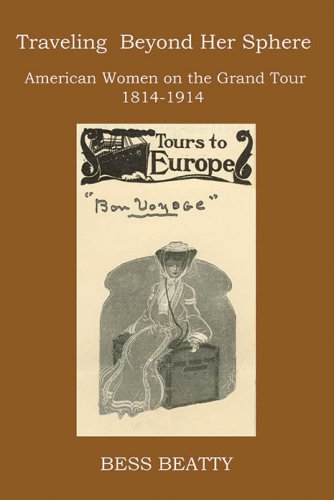 TRAVELING BEYOND HER SPHERE: American Women on a European Grand Tour, 1814 to 1914

The nineteenth-century ideal of domesticity identified home as women’s proper sphere, but the ideal was frequently challenged, profoundly so when woman left home and country to travel in foreign lands. This book explores the reasons for and ramifications of women making a Grand Tour, a trip to Europe, between 1814 and 1914; this century between major European wars witnessed the golden age of American Grand Tours.

Men and women alike were inspired by a Euro-centric education that valued the Old World as the fountainhead of their civilization. Reaching Europe necessitated an Ocean crossing, a disorienting time taking women far from domestic comfort. Once abroad, American women had to juggle accustomed norms of behavior with the demands of travel and customs of foreign lands. Wearing proper attire, even when hiking in the Alps, coping with unfamiliar languages, grappling with ever-changing rules about customs and passports, traveling alone – these were just some of the challenges women faced when traveling. Some traveled with their husband, others with female relatives and friends and a few entirely alone. Traveling companions had to agree on where to stay, when and where to dine, how to travel, and where to go.

The sinking of the Titanic in 1912 made clear that even in the twentieth century, a Grand Tour involved risk. Because more women survived then men, some insisted that the Titanic’s example should curb female independence. However, a growing number of women continued making a Grand Tour for the next two year. It was the Outbreak of war in Europe in 1914 that temporarily brought an end to a century of female Grand Tours.

“Beatty’s ability to weave the experiences of hundreds of American women on the Grand Tour in Europe into a consistent narrative is per se a remarkable feat. But the Author does much more than that. She uses the “journey” as trope to represent the long and difficult process of women’s emancipation, in its several cultural, psychological, social, and political  dimensions.”