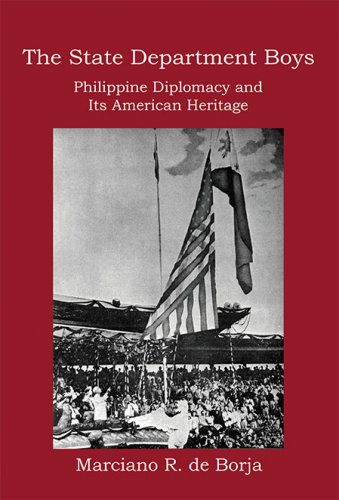 THE STATE DEPARTMENT BOYS: Philippine Diplomacy and Its American Heritage

The book relates the untold story of the efforts of the U.S. Department of State and selected U.S. Foreign Service posts to train the first Filipino career diplomats before and after Philippine independence in July 1946. These trainees eventually formed the core of the Philippine Foreign Service. In the Philippines, they are fondly and collectively called the “State Department Boys.” Some of these pioneer diplomats rose to prominence, becoming distinguished ambassadors to major countries and permanent representatives to the United Nations. Others led less brilliant careers. A few left the Foreign Service shortly after joining. All of them have already passed away – the last surviving member of the group died in 2009 at the age of 93.

The book also discusses Philippine-American relations in the wake of Philippine independence, in particular the efforts of the United States to ensure the smooth transition of the Philippines from a colony to an independent state and to enable it to conduct its foreign relations by setting up its Foreign Service and developing a core of professional diplomats.

The research is based mainly on primary materials – declassified State Department records at the National Archives and Records Administration in College Park, Maryland, personal documents, correspondence, and pictures from the Edward W. Mill Collection at the Bentley Historical Library. In addition, the author conducted research in leading libraries and archives in the Philippines and interviewed relatives and friends of the State Department Boys, some of whom shared newspaper clippings, pictures, and other materials for this book.

This  is a book in the ADST-DACOR Diplomats and Diplomacy Series.
To order from ADST email: admin@adst.org