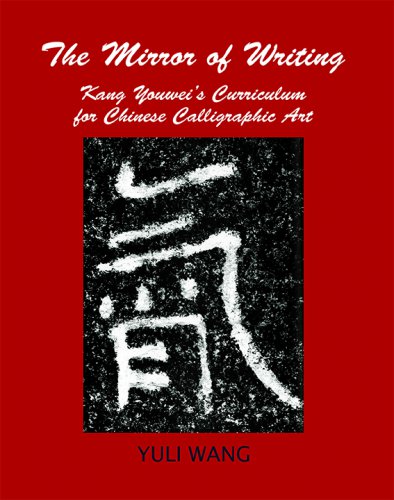 This book is an annotated and illustrated translation from The Mirror of Writing, by Kang Youwei (1889). It contributes to the study of modern Chinese art and culture, and to an understanding of the history and aesthetics of Chinese calligraphy. It contains more than 150 reproductions of the original illustrations.

In all the editions of The Mirror of Writing published since 1889, no illustrations have been given. By translating Book III “Buying Stone Rubbings,” with reproductions of more than 150 originally illustations, Yuli Wang provides a concise introduction to the art of Chinese calligraphy.

“The transmission of the tradition of Chinese calligraphy in the late 19th and early 20th centuries is in great measure due to the work of Kang Youwei (1858–1927), as both a scholar and a practitioner of this venerable art form. His influence on the aesthetic reception of calligraphy and the adaptation of its production to the emerging transformations in Chinese culture and society at this critical historical moment is inestimable. Yuli Wang’s translation of an important chapter from his book Guang yizhou shuangji, and her insightful assessment of its significance and implications for the study of Chinese calligraphy is most welcome. Especially important are the numerous illustrations of taben or ink rubbings of the calligraphic works discussed in his text. This is a must-read for any serious student of the art of Chinese calligraphy.”
─Stephen J. Goldberg, Hamilton College, author of Dislocating the Center: Contemporary Chinese Art beyond National Borders

“Kang Youwei’s (1858–1927) book Guang yizhou shuangji has played a pivotal role in enriching and shaping both the theoretical foundation and the creative practice of the beixue or Stele School of calligraphy. In Yuli Wang’s work, the numerous illustrations of ink rubbings of calligraphic works pertinent to the Stele School are essential resources to both researchers and practicing calligraphers.”
—Daniel Chak Kwong Lau, Associate Professor of Art History and Studio Art (Chinese calligraphy and seal engraving) at Hong Kong Baptist University; member of China Calligraphers Association