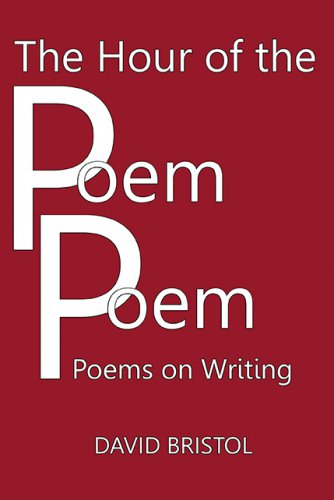 David Bristol attended New York University and the George Washington University Law School. He practiced law for 37 years. His poems have been published in numerous magazines and anthologies. He is the author of three earlier collections of poetry.

THE HOUR OF THE POEM POEM: Poems on Writing

David Bristol attended New York University and the George Washington University Law School. He practiced law for 37 years. His poems have been published in numerous magazines and anthologies. He is the author of three earlier collections of poetry.

“Yes,yes and yes. This is a work of stunning originality creating a poem necessary in our times the way Berryman’s Dream Songs were or the first time anyone read Roethke’s “I wake to sleep and take my waking slow.” This is what happens when the urge gets you and you must grab your paintbrush and start throwing paint on the canvas or better still, letting us all know what the hour of the poem poem is all about. I’ll read these again and again.”

“David Bristol’s new book is a long discourse with—and without—the muse.  Because Bristol is a poet who struggles to produce each utterance (the subtitle of his book is Poems on Writing), he is by turns frustrated, amused, satisfied and critical.  He admits ‘I suppose I am the one at fault./I have filled every gap with silence.’  His relationship to the poem is often adversarial even though Bristol feeds the poem ‘with a spoon’ and ‘wipes its ass.’  The poem is part teenager, part angel.  It is also the tune you hear ‘in the ear/Of the fool.’  Humor rather than lyric is the prevalent mode here, as in these witty lines: ‘You hear a recording with a prominent scratch./Scratch is what I have.’”
—Enid Shomer, poet and novelist

“David Bristol’s achievement here is a sustained work of imaginative engagement and profound wit: in thirty poems, each composed of seven quatrain stanzas, the voice is funny, bitter, angry, comedic, and serious as hell. Every poem is full of verbal surprises: poems about writing of poems, arguing with poems, despairing of poems – ‘So you spurn me / For wanting too much’ – fathering of poems, being driven mad by poems, existentializing of poems –‘“One poem and then another, I look again. / There is nothing but what I make.’ Forget these remarks – read The Hours of the Poem Poem aloud and you’ll experience raucous poetry at its best.”