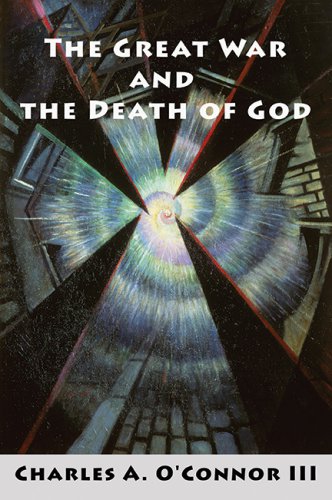 Charles A. O’Connor III practiced environmental law for over forty years, received his Doctor of Liberal Studies Degree from Georgetown University, and now pursues teaching and public speaking. He lives with his wife in Washington DC.

THE GREAT WAR AND THE DEATH OF GOD: Cultural Breakdown, Retreat from Reason, and Rise of Neo-Darwinian Materialism in the Aftermath of World War I

Charles A. O’Connor III practiced environmental law for over forty years, received his Doctor of Liberal Studies Degree from Georgetown University, and now pursues teaching and public speaking. He lives with his wife in Washington DC.

The catastrophic Great War left humanity in a world no longer trustworthy and reassuring but seemingly meaningless and indifferent. Instead of redressing humanity’s cosmic alienation, postwar Western culture abandoned its concern for cosmic meaning, lost its confidence in human reason, and enabled the scientific worldview of neo-Darwinian materialism to emerge and eventually dominate the Western mind. According to the proponents of that worldview, science is the only source of genuine truth, nature is the product of a blind evolutionary process, and reality at bottom is just physics and chemistry. Thus, God is dead and continued belief in a transcendently purposeful universe is intellectually indefensible and either disingenuous or delusional. This book attributes the remarkable success of this atheistic cosmology in displacing the deeply rooted belief in the nature’s divine governance to the First World War and its effect on Western theology, philosophy, literature, and art. By turning away from the eternal questions about the nature of reality, Western culture effectively ceded unwarranted credibility and prominence to neo-Darwinian materialism, including its recently strident New Atheism.

“I found this topic to be top-rate. The book is well researched and conceived, nicely narrated and analyzed, and an original body of inquiry into a challenging, fascinating intellectual tradition.”
―Ronald M. Johnson, Professor Emeritus of American History, Georgetown University.

“What this book has and many other such critiques generally lack, is a polished awareness of how the Great War contributed to the enshrinement of materialism as an authoritative and influential cultural motif in twentieth and twentieth-first century thought and artistic expression.”
―John F. Haught, Professor Emeritus of Theology, Georgetown University.

“In The Great War and the Death of God, O’Connor revisits the 20th century’s journey from Nietzsche’s declaration of the “death of God” to the rise of materialism as the dominant worldview of western intelligentsia. We live in a world that has largely expelled both mind and meaning from the citadels of serious intellectual pursuit, and O’Connor’s book is a fascinating and scholarly expedition into the “how” and “why” of that troubling development. Atheists, agnostics, and religious people alike will find much to contemplate in O’Connor’s carefully argued work, as he shows us that the philosophical commitments of materialism are historical, contingent, and in need of examination—worthy of robust questioning and healthy dissent.”
―Carter Phipps, author of Evolutionaries