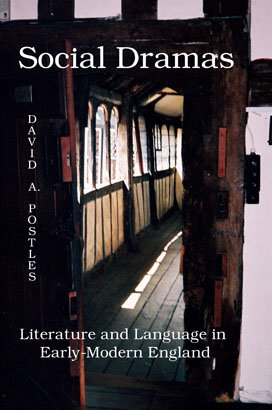 Although literature is often assumed to belong to the sphere of representation rather than constituting an accurate reflection of social reality, early-modern English drama can tell us much about social attitudes in the early Seventeenth century. The City comedies were, in particular, composed by authors who were embedded in the mundane social existence of London, in its quotidian transactions and exchanges, in its less salubrious contexts of debt, drinking, death and incarceration.Although the dramatists had slightly differing allegiances, their commentaries all illuminate ‘middling’ society in the City of London.

“This new work by David Postles raises important questions in an innovative manner. It will certainly be welcomed by the historical community.”
—Bernard Capp, FBA, Dept of History, University of Warwick

“David Postles is one of the most innovative social historians writing today.”
—Nigel Goose, Professor of Social and Economic History, University of Hertfordshire

“This book will be significant reading for all those working in the field. It will be warmly received by readers and reviewers, and will remain a work of reference for scholars and students for the future.”
— Greg Walker, Regius Professor of Rhetoric and English Literature, University of Edinburgh