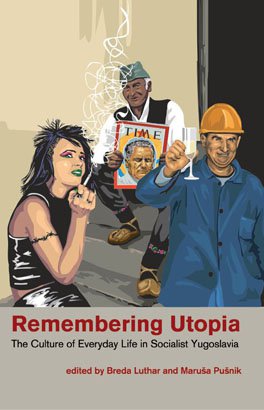 Breda Luthar is Professor at the University of Ljubljana, Department of Media and Communication Studies.

Maruša Pušnik is Assistant Professor at the University of Ljubljana, Department of Media and Communication Studies.

REMEMBERING UTOPIA: The Culture of Everyday Life in Socialist Yugoslavia

Breda Luthar is Professor at the University of Ljubljana, Department of Media and Communication Studies.

Maruša Pušnik is Assistant Professor at the University of Ljubljana, Department of Media and Communication Studies.

The history of socialism lacks close accounts of the texture of life in the margins of society, which include narratives of the feelings, experiences and practices of ordinary people. This book provides them and undermines persisting interpretations of “real” life under socialism, which rely on macro-studies of social structures and on the political and institutional histories of socialism. As such, the book is also an attempt to de-Westernize the discourse on Central/Eastern Europe as Europe’s periphery or its Orient. The culture of memory is evoked either through oral traditions or textual analyses of records of the public discourse. Both facets contribute to a cultural history of the era of socialism in Yugoslavia between 1945 and 1980 (Tito’s death).

“This is a highly original project, which will cover a much neglected area, helping those who either did not make it to Yugoslavia in Tito’s time or were born too late to understand what life then and there was all about.”
–Sabrina P. Ramet, Professor of Political Science at The Norwegian University of Science and Technology in Trondheim, Norway

“This collection represents an original and highly useful work that helps fill a gap in the existing literature on socialist Yugoslavia and East-Central Europe in the Cold War. It also makes an important contribution to cultural history of the region in the second half of the twentieth century.”
– Dejan Djokic, Lecturer in Serbian and Croatian Studies, The University of Nottingham

“This book focuses on a cultural and social history of socialist Yugoslavia from the perspective of ‘ordinary’ people and by reconstructing their memories. The contributors, many of them belonging to a new generation of scholars from the former Yugoslavia, employ new approaches in order to make sense of the complicated past of this country.”
– Ulf Brunnbauer, Department of History, Freie Universität Berlin