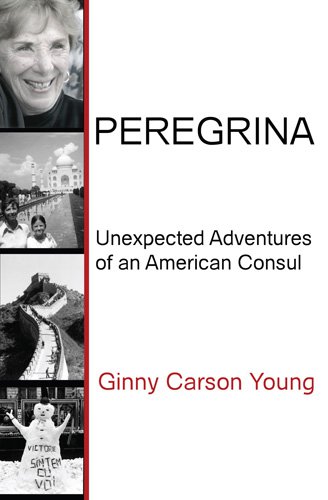 Virginia Carson Young joined the Foreign Service and served in New Delhi, Hong Kong, the Yucatán, and Bucharest as first consul and then consul general. She now lives in Washington, D.C.

Virginia Carson Young joined the Foreign Service and served in New Delhi, Hong Kong, the Yucatán, and Bucharest as first consul and then consul general. She now lives in Washington, D.C.

This is the story of a woman entering a consular career on her own after the death of her Foreign Service officer husband. She describes the consular world with humor, empathy, and anecdotes.

She was sure that the appointment handed to her out of the blue was intended to tide her over, presumably just until she married again. But she went on to serve for twenty years as a consular officer in four posts, first looking after American hippies in India and after that a huge American  business community in Hong Kong. She was principal officer in the Yucatán area of Mexico, then consul general in Bucharest, Romania, before and after a revolution that resulted in the demise of dictator Nicolae Ceauşescu.

This memoir is far from academic; rather, it is quite personal—honest, wry, skeptical, at times amused, filled with human-interest stories (not too many) based on her consular experiences. The author finds occasional romance and a (sometimes tempestuous) second marriage. The book deals in depth with
policy on headline-causing adoptions in Romania (about which she was interviewed on Sixty Minutes) and a controversial refugee program.

This is a book in the ADST Memoirs and Occasional Papers Series.

To order from ADST email: admin@adst.org

“Ginny Young was the type of diplomat you want representing your country abroad. If you lost your passport, needed medical help or, heaven forbid, wound up in jail, she knew what to do and got it done. And if you were a citizen of that foreign land, you’d find her a friend eager to learn all she could about you and your country…. This fine memoir, told with much humor, details the many high points of Young’s time abroad and traces her growth from a diplomat’s wife to one of the best representatives of the U.S. government.”

“Wonderfully readable and sharp as a stiletto, Peregrina tells the memorable story of a State Department wife who, after the untimely death of her husband, reinvents herself as an American
consul general.  It’s a grand journey that carries her from Delhi to the Yucatán to Ceausescu’s soul-killing Romania, where she just happens to bear witness to a revolution. In a world where diplomats are notorious for not telling the truth, Ginny Carson Young is a heartening exception. Too honest to believe in the usual self-glamorizing myths, she gives us foreign service life as it’s actually lived.”

“Ginny Young emerges as a warm, self-deprecating, thoroughly committed Foreign Service officer whose approach to the world around her is tinged with a keen appreciation of the ridiculous. Her writing style is lively and engaging, strong in the many instances in which her values and opinions emerge.”

“As unique as its author, this story takes us on a journey that includes the Hill, Africa, Western Europe, India, Hong Kong, Mexico, and Romania during the collapse of the Ceauşescu dictatorship, with cameo stops in Haiti and Afghanistan. Along the way we glimpse a microcosm of Foreign Service life: the humor, tragedies, tests of integrity, and personal stresses affecting family and single women––all related with a zest for life that is Ginny. . . . A must read for anyone who may doubt the importance and variety of consular work, the “human face” of the Foreign Service.”

“Anyone would be lucky to lead a life as full and meaningful as Ginny Carson Young’s.  Even more, we would be lucky if we could capture it so elegantly and with such wit in prose.”