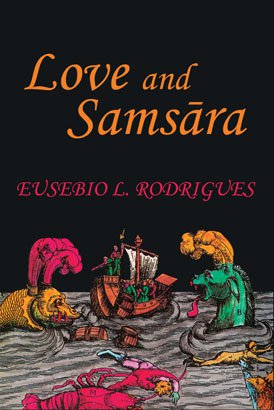 Eusebio Rodrigues, a native of Goa, India, is a Professor Emeritus of English literature at Georgetown University.

Eusebio Rodrigues, a native of Goa, India, is a Professor Emeritus of English literature at Georgetown University.

Love and Samsāra is an epic diorama of the world in the early 16th century, stretching from Europe to Asia, taking in Brazil, Africa, the Middle East, India, and then the lands below the wind, the monsoon countries of South East Asia. The story marks a time when the modern world becomes linked with power—gunpowder for cannon, printing for the spread of knowledge, and astronomy for a new understanding of the heavens. Here is a samsāra crowded with adventure, history, tragic love, philosophical speculation, religious confrontation, suspense and mystery, that reaches its climax in 1510 with the Portuguese conquest of Goa.

“Eusebio L. Rodrigues uses subtle metaphors of haunting memory to dramatize the Portuguese penetration of the Arab trading world of the sixteenth century, transforming it completely, an event more traumatic than the discovery of America.”
—Jaysinh  Birjepatil, author  of  Chinnery’s  Hotel.

“The most epic novel written about Goa.”
—José Pereira, author of Suárez: Between Scholasticism and Modernity.

“This is fiction at its best, a masterful multi-layered epic novel, compelling and lyrical at the same time that will challenge and delight any devotee of the genre and of the English language.”
—Roberto Severino, Professor Emeritus of Italian, Georgetown University.