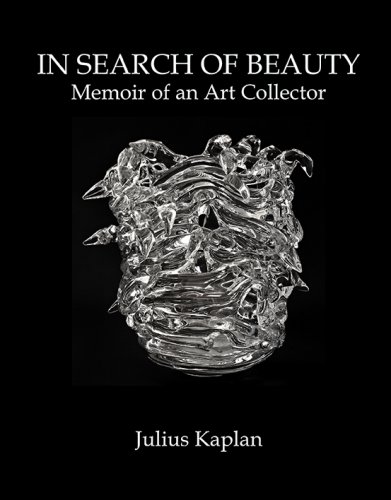 The author, Julius (“Jay”) Kaplan, is a retired international lawyer. After serving in the Kennedy Administration, he and three other partners established an international firm which ultimately had offices in Asia, the Middle East, Latin America and the United States. The firm was called Kaplan Russin and Vecchi. He finished his career with Cadwalader Wickersham and Taft. His international practice required much foreign travel, which brought him into contact with art he collected. (For more about the author’s legal career, see the Introduction to Secrets and Suspense: International Law Stories, his first book.)

IN SEARCH OF BEAUTY: Memoir of an Art Collector

The author, Julius (“Jay”) Kaplan, is a retired international lawyer. After serving in the Kennedy Administration, he and three other partners established an international firm which ultimately had offices in Asia, the Middle East, Latin America and the United States. The firm was called Kaplan Russin and Vecchi. He finished his career with Cadwalader Wickersham and Taft. His international practice required much foreign travel, which brought him into contact with art he collected. (For more about the author’s legal career, see the Introduction to Secrets and Suspense: International Law Stories, his first book.)

The author’s Search for Beauty began when he was a student of art history at Wesleyan University where he discovered Robert Henri, an art teacher and artist. Jay dreamed of owning paintings someday by students of Henri. He later did, with paintings by George Bellows, Guy Penne du Bois, and George Glackens. They, together with the likes of Marsden Hartley, Emil Nolde, and others make up the first chapter. As a young lawyer, Jay began collecting Chinese ceramics, starting with Ming (1368-1644) and Qing (1644-1911) dynasties Blue-and-whites, and Qing furniture. He then turned to the wares of the Song (960-1279) and Tang (618-907) dynasties. At this point, he changed direction when he discovered rare and beautiful 18th-century English and Dutch glass. For the next 41 years, he put together a world renowned collection, which is described in Chapter 2. His love of glass led Jay Kaplan to also became a collector of contemporary glass, starting with Dale Chihuly and “the father of studio glass,” Harvey Littleton, found in Chapter 4. The author also collected miniature “fantasy” Hanukkah menorahs; Indian miniature paintings of the 18th and 19th centuries; Gandara stupa art of the 2nd century CE; rare martini glasses and their Renaissance antecedents; Victorian and Edwardian silver menu holders; and finally, beautiful Dorwin-Furst stemware made for the Libby Company’s pavilion at the 1939 World’s Fair in New York.

“As a museum director, I am delighted to meet collectors who, like Jay Kaplan, have acquired deep knowledge of the field in which they collect. Moreover, Jay has had the taste and resolve to add only significant specimens to his collection. That Jay focused on acquiring important examples of 18th century English Glass is evident in the enviable collection he formed. Indeed, his approach should be a model for other serious collectors to follow.” —Dwight Lanmon, retired Director, The Corning Museum of Glass; former Director,   Winterthur Museum, Garden and Library

“Jay Kaplan assembled a most impressive collection of English glass. I am in full admiration of his enthusiasm for the subject together with his desire to share his knowledge with others. It is testament to the esteem in which he is held by fellow collectors that the name Kaplan is now closely associated with the best of 18th century glass.” —Simon Cottle, Director of British and European Glass, Bonham’s, and formerly Head of Glass at Sotheby’s, London

“While I have always greatly admired Jay’s 18th Century English wine glasses, it is fascinating to learn from this book the circumstances of his finding and buying each glass, and the thoughts that went through his mind at the time. This is an insight to how a great collection was formed by a great collector and those who helped to guide him in his quest.” —Dr. Richard Mones, Glass Collector, Doctor of Medicine

“The thrill of acquiring a beautiful glass comes through time and again. Patiently put together, it became a sumptuous collection. Kaplan is intelligent in that he is very much aware that his Search for Beauty took him to very knowledgeable scholars who knew and loved glass. Not surprisingly they became his close friends. Bravo!” —Simon Wain-Hobson, Glass Collector, Professor of Virology, Institut Pasteur, Paris

“Jay Kaplan, a master of the art of living, allows us to join him in his long love affair with art: the pursuit, the capture, and best, the art of living with art. He speaks of the artists represented over time in his collection–Bellows, Pene du Bois, Hartley, Luks, et al as friends, as are the contemporary artists whose work has graced his home. His reminiscences invite us to share his delight in artists, collecting and the world of art.” —Ruth R. Perlin, Associate Director (Retired), Center for the Study of Modern Art The Phillips Collection

“In the midst of a demanding law practice, Jay Kaplan became a true connoisseur of American art, focusing on an important niche period, the early 20th Century. His book is both a memoire and an art history; it gives insight to how the author acquired a depth of knowledge and, at the same time, developed a “good eye.” This book is a rewarding piece of research which constantly engages the reader. With this book, Jay joins Washington’s creative inner circles.” —Lenore D. Miller, Director, University Art Galleries and Chief Curator, The George Washington University

“Jay Kaplan has been a lifelong admirer of the great American realist painters Robert Henri and George Bellows. His memoir recounts a singular life inspired by Henri’s clarion call to his students (including Bellows) during the first decades of the twentieth century: art for life’s sake!” —Charles Brock, Associate Curator of American and British Paintings, National Gallery of  Art

“Jay Kaplan shares a fascinating history of how his collection of Chinese art began modestly, and evolved into a museum-quality collection. In all parts of this book, he brings to life not only the beautiful art in his collection, but also his experiences with scholars and other collectors.” —Iris Miller, Adjunct Professor, School of Architecture and Planning, The Catholic University of America

“For Jay Kaplan, collecting is more than a hobby: it is a passion. He finds delight in the entire process: the discovery, the acquisition, and the possession of beautiful works of art. Each stage is brought alive in this easy to read and most enjoyable memoire. And through it all, he made many friends with other collectors, dealers, and museum people. I feel it most fortunate to be numbered among them.” —Stephen Pohlman, Collector and International Entrepreneur