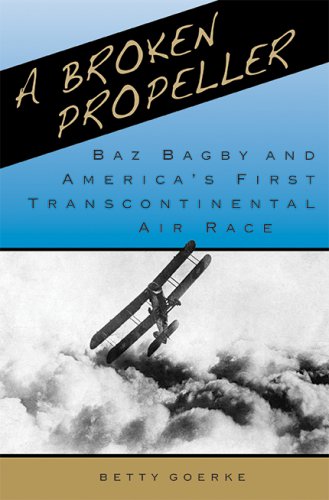 Betty Goerke is the author of five books, including Chief Marin: Leader, Rebel and Legend (2007) and Discovering Native People at Point Reyes (2012). She has also produce four award-winner videos for classroom use. She taught in the Anthropology Department at College of Marin for 36 years, and now she is teaching in a certificate program that she helped to create in Community Education.

Betty Goerke is the author of five books, including Chief Marin: Leader, Rebel and Legend (2007) and Discovering Native People at Point Reyes (2012). She has also produce four award-winner videos for classroom use. She taught in the Anthropology Department at College of Marin for 36 years, and now she is teaching in a certificate program that she helped to create in Community Education.

A Broken Propeller is the story of America’s first transcontinental air race. Pilots in this dangerous adventure flew WWI planes with open cockpits and no parachutes.

In October 1919 fifty-nine pilots competed in a round trip race that began simultaneously on Long Island and in San Francisco with predetermined stops 150 miles apart at airfields across the United States. Newspapers gave it front-page press: who was ahead, who was missing, who made an unexpected emergency landing, who crashed, and who was felled by blinding snowstorms.

The race was conceived by Brig. Gen. Billy Mitchell to promote the future of flight in the United States, but all did not go as planned. There were 54 crashes and seven deaths. Pilots landed on rooftops, in Lake Eire, and the front-runner had his dog with him. The predominant plane in the race, the DH-4, had life-threatening flaws. Pilots faced heavy rain, gale winds, snow, ice, and treacherous landing fields. As a result they lost their way, and made courageous and foolhardy decisions. There were comic moments, and poignant ones. The future head of the Air Force, Gen. Carl A. Spaatz was a feisty participant. The heroes were the ranchers and farmers who helped downed airmen with food, lodging and fuel.

There has never been a book about this extraordinary moment in American history. The author is fortunate to have what earlier reports lacked: memoirs of pilots, plus the charming and humorous letters and log of a participant in the race, her father, one of only eight who completed the race. 1st Lt. Ralph (Baz) Bagby was a former professional baseball player and an MIT graduate.

“From an accidental attic discovery of a treasure trove of century-old letters, family history morphs via Betty Goerke’s trenchant and lucid pen into a most exciting, brief history of the initial heroic and tragic trans-continental flights across the US. Flying in open-cockpit planes with no parachutes or safeguards of any kind, the men who participated were courageous (some would say foolish) beyond measure. A Broken Propeller brings to life these men and this heroic, sometimes tragic race.”

“All interested in the thrills and spills of flying WWI biplanes in the major flying event of 1919―The Transcontinental Air Race―or in the early history of Crissy Field at the Presidio of San Francisco, will find A Broken Propeller well worth their time.”

“A riveting and uniquely authoritative portrayal of the 1919 Great Transcontinental Air Race. That event, then eagerly followed, hour by hour, by the entire country but until now almost forgotten, was a milestone in America’s climb from near the bottom of World Aviation to the premier place it would occupy by the early 1930s. As historian Betty Goerke dramatically illustrates the race was fraught with carnage, wreckage and disaster. Her father, Lieutenant (later Colonel) Baz” Bagby flew in one of the only eight airplanes out of 59 entrants to finish the round-trip race on time. It was her recent discovery of a trove of his logbooks, letters and memorabilia that enabled her to so vividly depict the actual flying. We can easily visualize Baz Bagby climbing out of the rear cockpit to sit in the slipstream astride the fuselage in order to weigh the airplane’s tail and prevent a noseover as it landed on a treacherously muddy field.  In addition Professor Goerke places the race in its historical context. Generals Mitchell, Spaatz and Doolittle and even Eisenhower all have roles to play. This book is likely to be the definitive history of the Race. It is well worth reading by anyone interested in American Aviation.”